What is the CAT4 test?

The Cognitive Abilities Test Fourth Edition (CAT4) is set by GL Assessment – one of the UK's leading providers of formative assessments, including the 11 plus. It is an aptitude test based on the analysis of data from around 25,000 children in the UK in four main areas (see below).

The CAT4 tests are normally sat in Year 3 and again in Year 6.

Why do schools use the CAT4 test?

Tests in the core subjects (such as English and Maths) allow teachers to assess a child's knowledge of a particular area of the curriculum. The CAT4 test, on the other hand, gives teachers a more rounded view, revealing elements of a child's ability that might not be obvious in the classroom.

The CAT4 test is used by schools to evaluate:

It is also used to help teachers:

Some selective schools also consider the results of CAT4 tests taken in school as part of their admissions process, as well as Key Stage 2 assessment results and an interview. Secondary schools may also use the CAT4 test at the start of Year 7 to 'stream' students into academic sets (creating classes based on academic ability). This is to ensure that the teaching methods and pace are right for each child.

What is the format of the CAT4 test?

The CAT4 test is a timed assessment of 72 minutes, taken under exam conditions, with multiple-choice questions. Children are assessed in four main areas (known as 'batteries') and each consists of two subsections.

Introductory information with practice examples is available at the start of each section. This is to help children familiarise themselves with the style and format of the questions before the test begins.

Verbal reasoning is a measure of how a student thinks and solves problems using words. This is an area commonly assessed in the 11 plus. In the CAT4 test, this battery is split into two subsections:

Non-verbal reasoning is a critical thinking skill that involves solving problems and identifying patterns using pictures and diagrams. This is also assessed in many 11 plus exams. In the CAT4 test, the two subsections are:

Quantitative reasoning is a numerical skill that measures how a student thinks and solves problems using numbers (commonly assessed in maths). The two subsections in the test are:

Spatial ability, also known as spatial reasoning, involves transforming visual images in the mind – a key skill for STEM subjects. In the CAT4 test, the two subsections are:

Scroll to the bottom of this article to see the answers to the example questions. If you would like further details about the four batteries, take a look at the video below from GL Assessment. 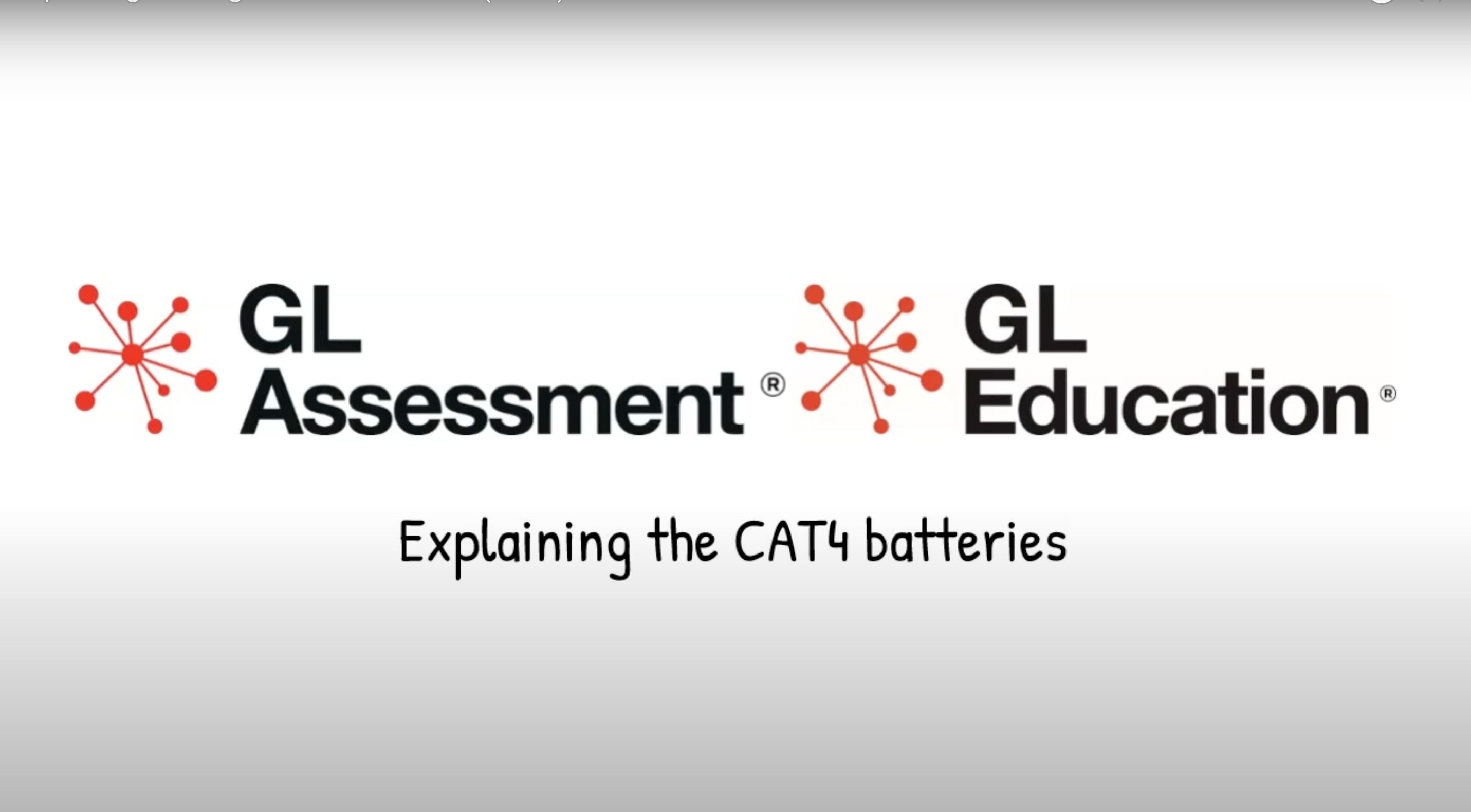 What is a good CAT4 score?

The CAT4 test will produce a National Percentile Rank (NPR) and a Standard Age Score SAS). This is the most important piece of information derived from the test.

The SAS is based on the child's raw score, which is adjusted based on their age (in years and months) at the time of the test. The SAS is then mapped onto a normal distribution curve where a SAS score of 100 places a child as exactly average for their age group.

Grammar schools and selective independent schools are often looking for Standard Age Scores of at least 115, and often higher, to fill their places in Year 7. 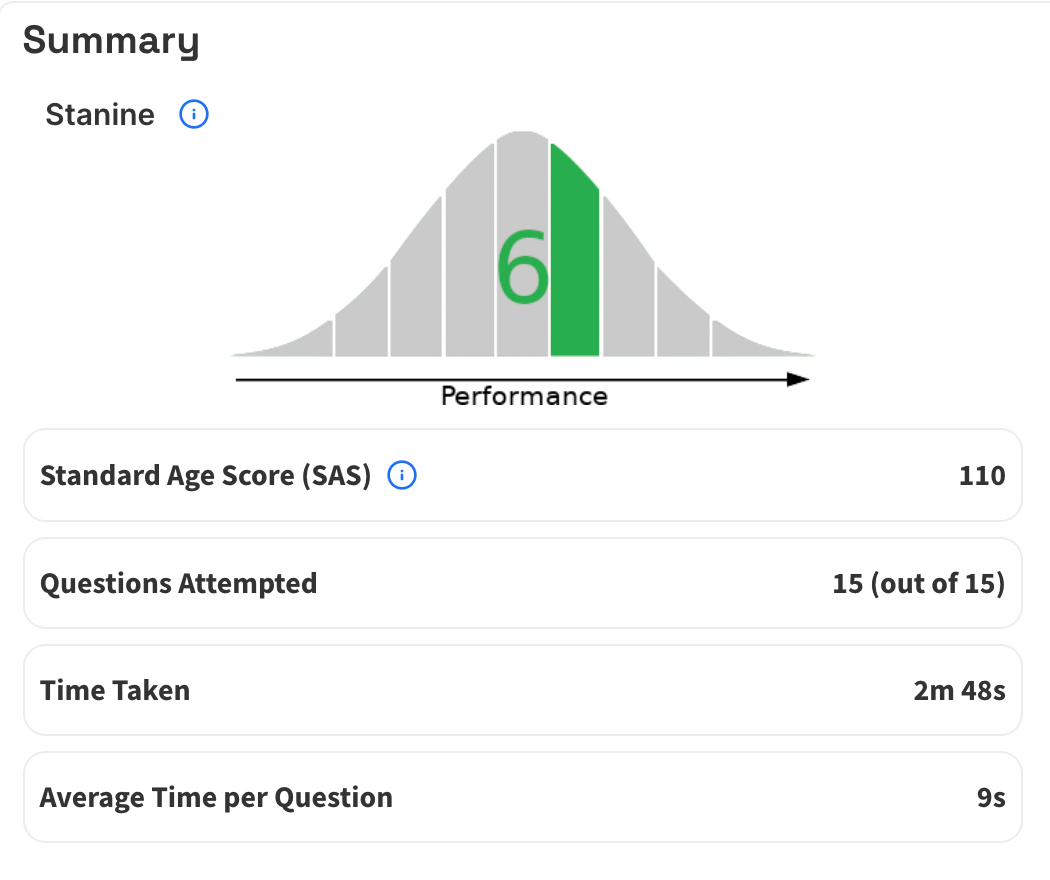 Should my child revise for CAT4?

The CAT4 test is designed to assess a child's natural academic ability – it is not a test of learnt knowledge. For this reason, GL Assessment does not produce sample or example tests and does not advise that pupils practice ahead of time.

For many children, however, the CAT4 test may be the first time they have encountered these styles of questions and they may also be the first assessments your child sits in exam conditions. While it is not entirely possible to revise for the test, there is no harm in your child practising a few example questions so that they feel comfortable with the format. If your child is taking the 11 plus, there may be a lot of crossover in the way the questions are presented.

Familiarise your child with the CAT4 on Atom Nucleus

Atom Nucleus – our platform for home learning – includes verbal reasoning and non-verbal reasoning questions. Our CAT4 practice tests mirror the real assessment in terms of timings, number of questions and skill-based content, and familiarity with these will help your child to perform at their best when sitting the real test either for senior-school entry or for academic streaming.

To keep up the momentum, we also recommend that you continue to use Atom Nucleus until the end of Year 6. This will enable your child to demonstrate their full academic potential to any future school by using Nucleus to prepare for the tests at the end of Year 6 and the start of Year 7.

Start your 5-day free trial of Exam Preparation Plus today to gain access to our CAT4 tests.